As a developer managing containerized applications can be daunting especially when it comes to using a command-line interface; administrating docker containers, writing complicating, and having to learn the various commands can be intimidating.

Depending on where you land on the spectrum, you might have no problem using a command-line interface; but for many folks, it’s a challenge.

Portainer is an open-source service that provides a visual web view for containerized applications. it is a container management tool for Docker, Docker swarm, Kubernetes, and Azure Container Instances (ACI).

Portainer gives you the ability to deploy and manage your docker containers without having to write code like you’ll normally do with a CLI. With portainer, you have the flexibility of viewing your containerized apps and managing them via a graphical user interface.

In this tutorial, you will learn how to set up, create, and manage docker containers and images with Portainer.

The portainer architecture requires that you first deploy a portainer server. This server will serve as a central point of operation. You can have the portainer server running on a virtual machine or on a kubernetes cluster as a docker container.

In this tutorial, you will need the following.

(If you don’t use ubuntu, you can probably adapt these instructions to your distro of choice)

Setting Up Portainer for Docker

Since portainer runs as a containerized application, it is required that you create a docker container, configure the volume for persistent storage of the portainer server, and assign port number bindings.

Run the command below to configure a volume called portainer-data :

Install the portainer Docker standalone version using the command below:

This command will create a docker container called portainer-ce and run the portainer server in a detached mode.

Additionally, this command will mount the docker sock to mount local docker containers and Mount the volume portainer-data to persist data.

Creating and running portainer as a docker container.

Confirm if the portainer server is up and running using the following docker command.

Confirming portainer is up and running.

Portainer becomes really useful and powerful when used via the GUI. Since you now have portainer up and running, visit the address below on your favorite browser to access your login page. You’ll need to create a user and log in so you can access the portainer GUI to administer your containers. 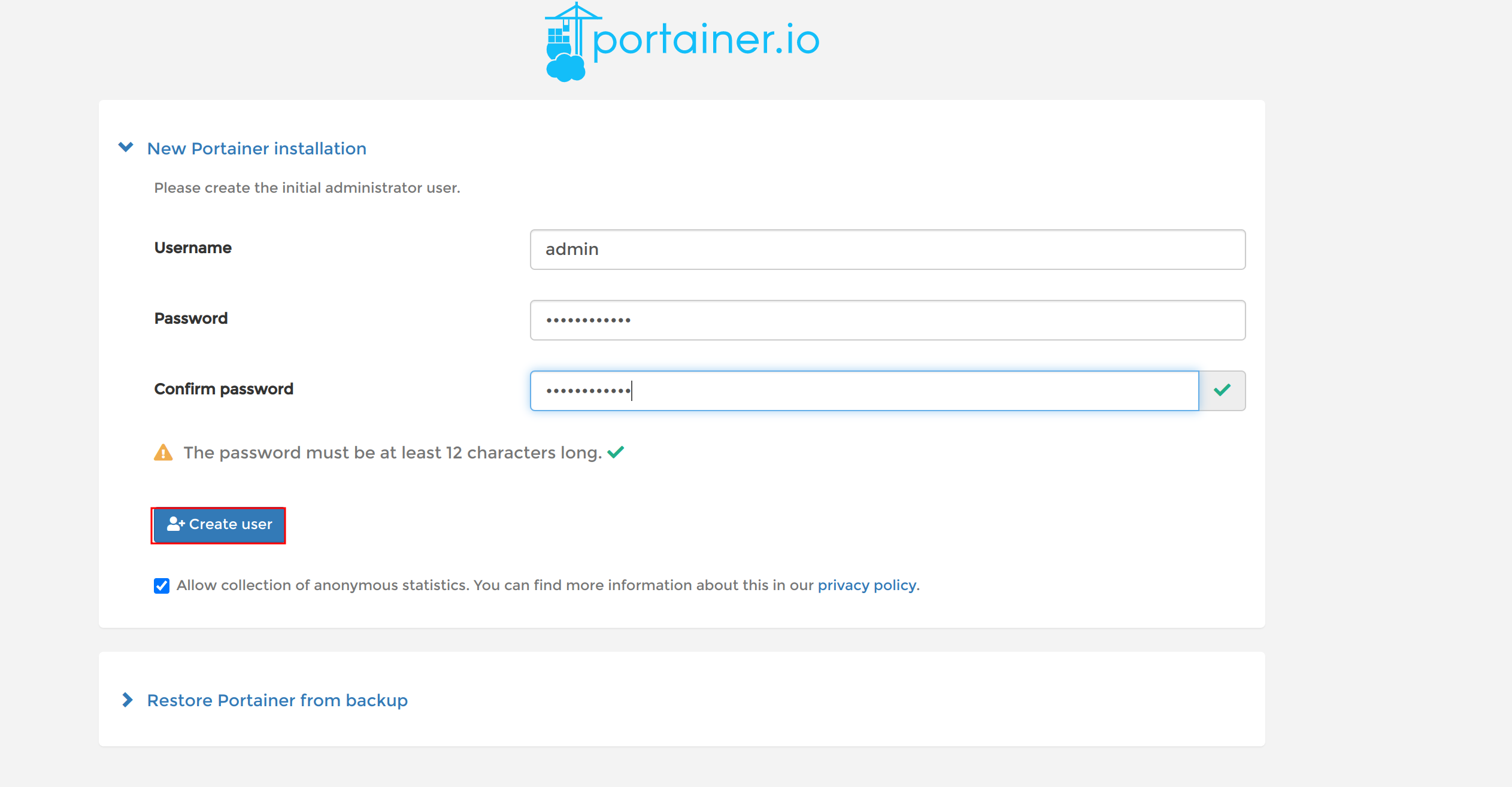 On successful creation, the page will redirect to a quick setup page.

On the quick setup page, click on the Get Started box highlighted below to manage the environment where portainer is currently running on.

You should see all the containers running on your machine together with other resources like stacks, volumes, and images.

The image below showcases the number of docker compose stacks, images, containers, volumes, and networks available on your machine.

On the right panel in your dashboard, navigate to the containers option **to view your docker containers.

On the containers page, you should see all the containers available on your machine. You also can start,stop,kill,restart, pause,resume,remove as well as add a new docker container.

The image below showcases all docker containers available locally; both the ones that are running and stopped together with their ip-addresses and ports exposed if available.

To add a docker container, click on the add container button and the page would then navigate to a create container page where you can specify some configuration settings for the container you want to create.

For testing, ‌set the container name to Nginx-web-server and populate the image field with the value - nginx. You’ll need to do this because you will deploy a Nginx web server.

Toggle both the always pull the image and auto-remove configuration setting so that portainer constantly gets the latest version of the image, and then stops and remove any existing instance of the container, respectively.

Finally, scroll down to the bottom of the page and click on the Deploy container button to create this container.

On successful deployment, you should have the nginx container in your container lists in a running state and exposed on port 80.

Visit the address localhost:80 on your favorite browser to see the nginx web server welcome page.

You have now successfully created and deploy an nginx web server with portainer without having to write a single line of code!

Other than just containers you can manage docker images as well with portainer. On the right panel, navigate to the images option to see your images lists.

On the images lists page, you can see all the image you have locally. You can also remove, import, export, pull an image from a docker registry and even build a new image.

To build an image, you can simply click on the build image button to build a new image. Portainer provides you with different options to use while building a new image. You can use a web editor provided by portainer, you can upload a dockerfile from your computer, or specify a url to a file.

To pull a docker image from a docker registry, on the pull image section from the image list page; add the image name and tag in the image field to pull an image as shown in the image below:

The image below shows a myvueapp image is to be pulled from dockerhub.

wait for the image to be downloaded successfully as shown below.

Once downloaded successfully, you should be able to view your newly downloaded image. You have now pulled a docker image from dockerhub effortlessly leveraging portainer

A new screen with other configuration settings will be shown to you:

The default agent is used to communicate and manage local Kubernetes cluster resources. while the edge agent is used for connecting production or cloud based Kubernetes environments on public networks which is done via an encrypted TLS tunnel to prevent the edge agent from being public. This applies to local and cloud based Docker swarm clusters and Azure container instances (ACI) as well.

💡 Adding an environment is beyond the scope of this tutorial. If you’d like to learn more on how you can add an environment visit, the portainer documentation as it is required that you have either a local or could-based kubernetes cluster or docker swarm cluster up and running. 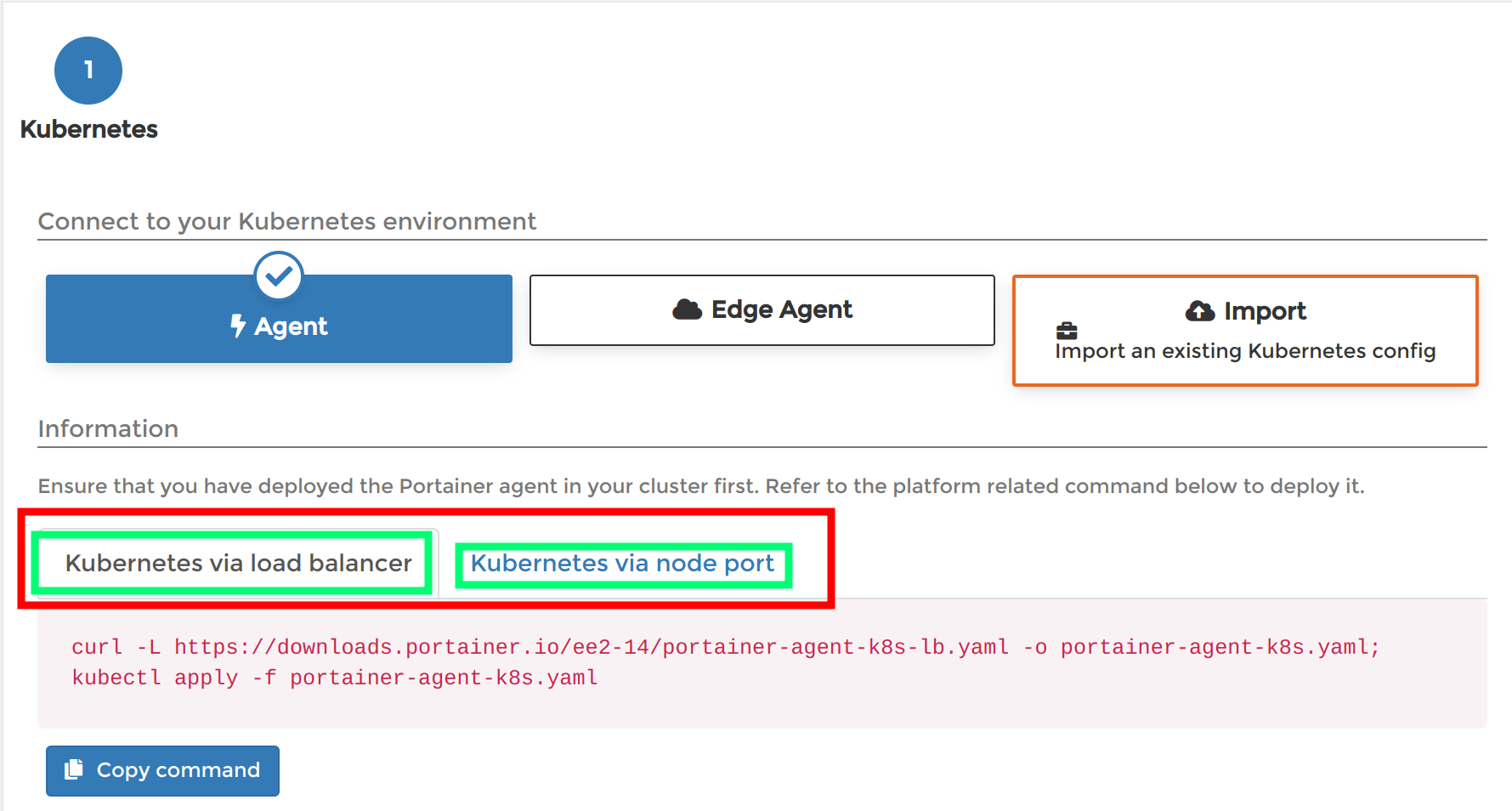 At this point, you have only scratched the surface. There is lots more to learn about Portainer. Role-Based Access may be the next area of Portainer you want to explore.

Mercy Bassey is a JavaScript programmer with a passion for technical writing. Her area of expertise is Full-stack web development and DevOps/IT.

On November 20, 2020 Docker began rate limiting requests to its popular Docker Hub registry. This change applied to all users, anonymous or free. When this ...

When you first create an AWS account a lot of resources get created for you by default. For starters, you’ll get a VPC in each region. In each of those you’...