TLDR We are switching from a source-available license, to an open-source license for Earthly.

We started Earthly with the mission of bringing better builds to the world and to become the standard CI/CD framework that allows pipeline development locally and running on any CI.

Oftentimes, to be able to deliver on a mission, you also need a way to sustain that mission long-term. For us this meant raising capital from investors and building a sustainable business around it. To protect the interests of the business, we need to create a moat1. Thus, some time ago we decided to use the source-available license Business Source License (BSL), which is like an open-source license, but with one exception: it prevents anyone from creating a competing product and also commercializing it.

On our journey to make Earthly the standard framework for CI/CD pipelines, we realized that Earthly would not be as successful long-term if we don’t make it an open-source standard. Today, we are proud to announce that Earthly switches to an open-source license, Mozilla Public License Version 2.0.

Following user feedback, advice from open-source industry CEOs and conversations with our network of advisors, we decided that a switch to a more open model is best for both the community and also for the business. Here is how our thinking evolved.

Understanding the Motivation Behind Source-Available

The first observation we made was that source-available licenses (and sometimes open-source copy-left licenses2) are more predominantly used for databases. More and more this seems like a more widely accepted model in that world. We asked ourselves why that is and we spoke to a few of the leaders of database companies. Here is what we found:

Overall, we believe that source-available models are net good when used in the right situations. Normalizing them is a fight worth fighting. Putting the power of innovation in the hands of the small guys and preventing monopoly bullying is in the best interest of the user in the end because it encourages innovation.

However, as our thinking evolved, we now believe that for Earthly specifically, it’s not the best choice.

Earthly’s growing user base is mostly okay with the BSL license, but there were a few cases where it seemed like a point of friction for our users. Some online license feedback we could dismiss as trolling but other interactions were genuine concerns from sophisticated prospective users. 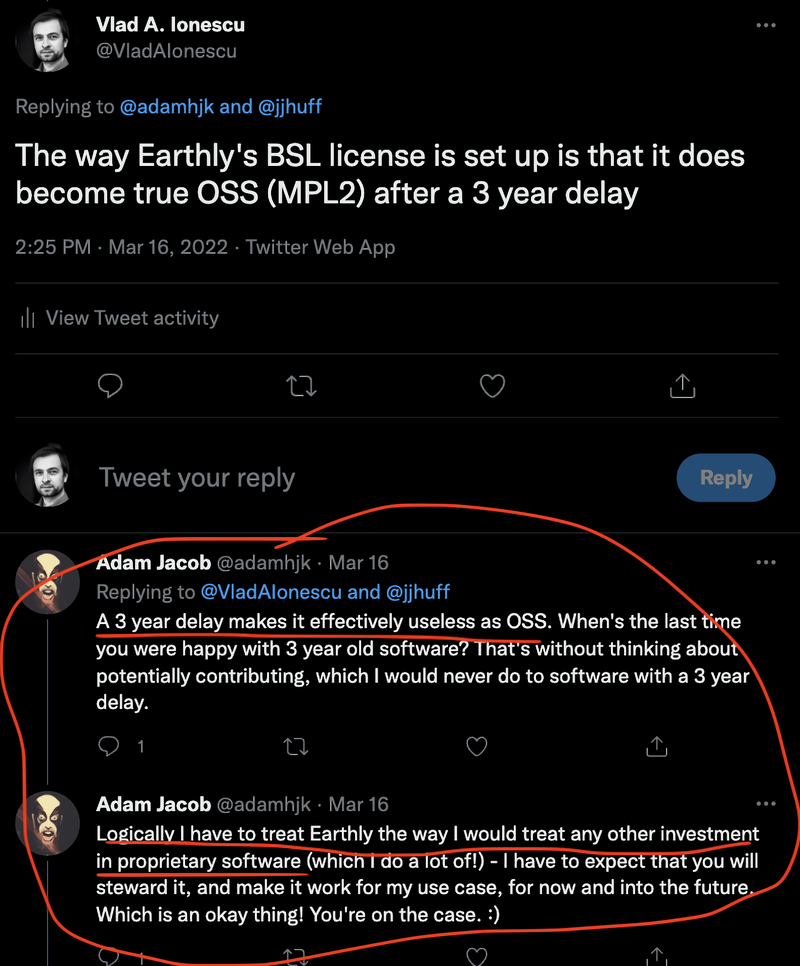 Adam Jacob is the founder of Chef and System Initiative and he has been thinking about this topic for over a decade - he even wrote a book. The 1:1 conversation that ensued after the Twitter interactions was extremely enlightening: this twitter thread summarizes it pretty well.

In another example, a prospective user had a hard time understanding whether BSL would be ok in his organization. 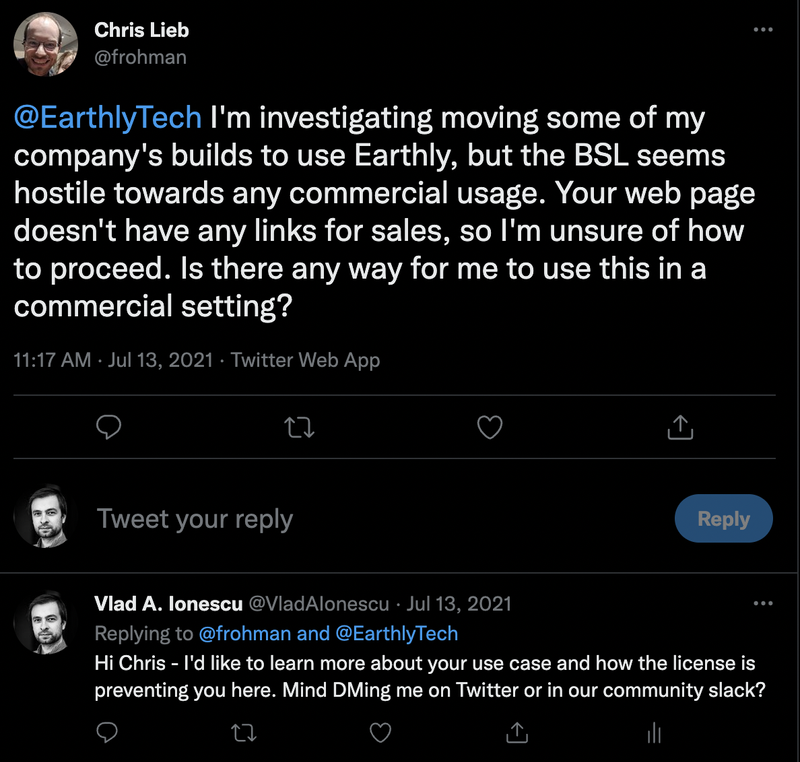 We were able to convince Chris in the end. But he still had to jump through a few organizational hoops and you can say it’s a lucky case: he reached out and we were able to clarify BSL for him. But not every prospective user is as determined as Chris.

The above is only a sample of the interactions, and again, the vast majority of our users were ok with BSL, and of those who initially weren’t most ended up being ok with BSL after an explanation. But there was onboarding friction, and some users were against BSL altogether, or just didn’t have the patience to look into it and just gave up.

In some cases, highly popular, foundation-owned, projects like some Apache projects and some CNCF projects wanted to take a look at Earthly, but the license was simply a non-starter for them.

Although we’ve had a ton of growth in a very short amount of time and although it’s very difficult to perform an A/B test of the different licenses to measure growth difference, there is anecdotal evidence that led us to believe that in our case source-available has limited some growth.

It Cannot Be a Standard Unless it’s Open

Beyond that, there is the wider architectural perspective. We want to make the Earthly syntax a unifying framework on top of any CI/CD vendor. By that definition, a more open project will not only help our users integrate better with the various CI/CD vendors out there, and thus making Earthly better for everybody, but it will also consequently create a stronger community, which helps the mission from the business perspective too.

There is some analogy to be drawn about the Postgres / CockroachDB case - the syntax (the Postgres SQL dialect) is open-source, which helps foster a flourishing community ecosystem full of various vendors, community tools, integrations, and interoperability. If the syntax weren’t an open standard, Cockroach wouldn’t have had an ecosystem to plug a commercial product into.

As we were discussing with our network of advisors, Chad Metcalf (former Chief Architect at Docker, and an Earthly investor) said:

If Dockerfile and Compose are analogous wouldn’t the syntax becoming a standard be better in the long run? It cannot be a standard unless it’s open. The more Earthfiles in the world the better. […] Make it easy to fork you. But they cannot call it Earthly. The logo, the CLI name, all of that is yours. All of that work goes back to you.

In addition, the parts that are deeply integrated into the user’s code are better when they are open-source. Developers are more comfortable making deep integrations with another ecosystem in such cases, as open-source prevents vendor lock-in concerns and helps justify a long-term invasive investment in the technology.

We have made this decision with careful consideration and although there are some risks, we believe that the benefits, for both our users and for us as a business, outweigh the drawbacks significantly. We also made this decision knowing that once opened up it would be unfair to ever go back and constrain it ever again. So here we make a pledge to forever keep Earthly open-source from now on.

As we are happy to embrace open-source whole-heartedly for the Earthly project and the Earthfile syntax, we will continue to pursue a commercialization strategy that relies on open-core and an Earthly-as-a-service CI/CD freemium product, which will have proprietary components3.

By internal metrics Earthly has grown 10.4x year-over-year, and although we’re gaining momentum, we believe we’re merely at the beginning of the journey. Companies such as ExpressVPN, Workday, Roche, Bluecore, Namely, and many others rely on Earthly every day.

Open-sourcing Earthly is the best decision for both the Earthly community and for us as the company. We’re grateful for the help, support, and feedback our users have given Earthly throughout our lifetime in return and this decision is largely because of you.

As Earthly turns two this month, we’re looking forward to an even brighter and more open future. If you’re new to Earthly, come give Earthly a shot and develop CI/CD pipelines locally that run in any CI. Also, we’re hiring!

As an Ubuntu user, I find myself typing apt install … frequently as a way to install software on my system. But what if I wanted to distribute my code t...

Docker and Rails: Running Ruby on Rails with Docker