The data tier consists of a database and other application services that aid the read/to write access to that database.

When this database goes offline, the whole web architecture goes down as there is no component to manage data.

The following images illustrate the scenario:

The above image shows the web layer and the data layer in the architecture. When the database server is online, it will serve both read and write operations and the whole architecture remain functional.

Once the single database server goes down as illustrated below, The whole architecture goes down as there are no other means to read or write data from the presentation layer:

One of the approaches that could mitigate such a flaw in this architecture is Database Replication.

Database Replication is an approach where multiple instances of a database are configured for a server, such that data written to one database is replicated and stored in other database instances as well.

The image below shows the configuration of a single primary and Secondary Database: 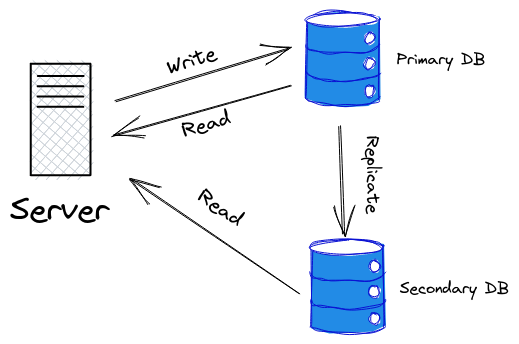 Such a standby database server that can accept connections and serves read-only operations is called a Hot standby server.

With this configuration, the Secondary DB can continue to serve read operations from the data that has been replicated to it even when the Primary DB goes down as shown below: 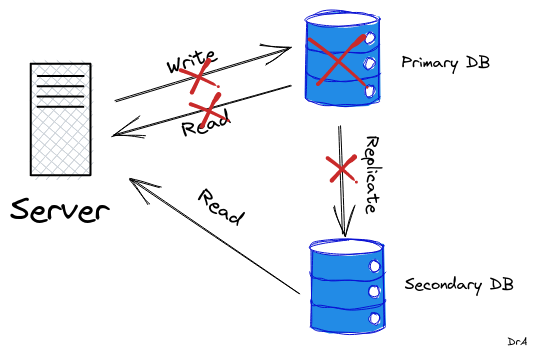 This will make](/blog/using-cmake) sure our application does not go down totally when the primary database goes down because the secondary database will still be available to serve read operations.

In more sophisticated configurations, one of the secondary databases can be promoted as a primary database to serve both read and write operations.

In this tutorial, We will configure Database replication by setting up a Primary database and a Hot Standby database in Postgresql. These two instances of the database will be a container of Postgresql docker image.

We will connect these two databases to a Django application. Afterward, we will create a Django database router to route queries to these databases.

To follow up with this tutorial, it will be beneficial if you are familiar with:

However, if you are not familiar with the above, this is quite an interesting topic that you would gain one thing or the other, so stay around.

Setting Up the Primary Database

Most of the files we will need to configure for the Postgresql database replication require that you have access to the root user.

Use the command below to switch to the root user:

Since we will need two instances of Postgresql on our machine, we will make use of docker.

If you have Postgresql installed on your machine, start by stopping any instance of Postgresql service running on it:

Pull an official Postgresql docker image with version 12 or higher:

Create the primary database instance from the Postgresql image:

The above command will also name the database postgres which we will later use as the value for the NAME key in the database configuration when connecting to Django.

Start the Postgresql interactive environment on localhost and port 5432 as user postgres that we created for the primary_db container:

Create a user with a username of replica and password replica with Replication privilege:

You should get the output shown below:

Add the following to the end of the pg_hba.conf file in the /tmp/lib/postgres/ directory

You can add it by opening the file or using the echo command as shown below:

This allows a replication connection to this primary database from a standby database that authenticates with the replica user that we created earlier.

You can open the file to see the content of the file:

CAUTION: Configuring the system for local “trust” authentication allows any local user to connect as any PostgreSQL user, including the database superuser. If you do not trust all your local users, use another authentication method.

Update and un-comment the following configuration:

In the WRITE-AHEAD-LOG section:

In the REPLICATION section:

The max_wal_senders configuration specifies the maximum number of parallel connections that the standby servers can send. A value of 0 means no replication is allowed.

This configuration determines how many standby servers can connect to the primary database.

Note that this configuration is only applicable to the primary server.

Restart the primary_db container after saving the postgresql.conf file:

Make a full binary copy of the Postgresql directory:

The -P argument shows the progress and -v for verbose.

You should get the output below:

We will build the standby database on this backup file.

Open the postgresql.conf file in the /tmp/postgressecondary/ directory:

The primary_conninfo specifies a connection parameter that the standby server will use to connect to the primary server.

The user and password we passed are for the replica user we created in the primary_db earlier.

The port is the port the primary_db container is running on.

The db will be an alias for the primary_db. We will add the alias while creating the docker container for the secondary database.

The hot_standby configuration allows running queries on the standby server.

The presence of the standby.signal file ( even though empty ) will enable the standby server to start in standby mode.

Create the secondary database container by running another instance of the PostgreSQL container:

The database’s name will default to postgres like the primary_db container.

You should get the following output:

As shown in the image above, The database is ready to accept read connections.

You should get the output below:

For a detailed description of this output, you can check pg_stat_replication.

We need to create a replication slot that will ensure that the primary server does not remove the records of changes in data ( that are stored in a file called Write Ahead Log or WAL files ) written to it until the standby server receives it.

The replication slot is needed to keep these WAL files available even when the standby server is offline or disconnected.

To create this replication slot:

Open the postgrestql.conf file of the secondary_db and add the following in the standby server subsection of the Replication section:

We need to create a physical replication slot on the primary_db with the same name as the value of the primary_slot_name configuration.

Open the PostgreSQL terminal for the primary_db container as the postgres user and add the following:

You can restart the primary_db and start the secondary_db container:

In case any of them is not up, you can check the container logs to troubleshoot:

To confirm that the replication slot is active:

Open the PostgreSQL terminal as the postgres user for the primary_db:

Enter the command below:

You should see the output below:

Open the PostgreSQL of the primary_db as user postgres:

You should get an output of CREATE TABLE

You should get an output of INSERT 0 10

You should have an output as shown below:

You can now retrieve this same data on the secondary_db because it would have replicated to it.

Open the PostgreSQL terminal for the secondary_db as user postgres:

Note that the secondary_db is running on port 5433

Retrieve all the data for the test table:

This shows that the replication configuration is successful.

If you try a write operation on this database you will get an error as shown below:

I am just going to create a simple database model with the common data types as fields.

Add the model below in the models.py file:

Now that we have a model, let us connect the two databases to the application:

Open the settings.py and add the following configuration:

The first database configuration which is the default connects to the primary_db container as user postgres and it runs on the localhost at port 5432. The default database name created by docker is postgres.

The replica configuration connects to the secondary_db container which runs on localhost on port 5433.

A database router is a python class that provides an abstraction on how to manage multiple databases. It provides about 4 methods which include: db_for_read which returns the database to use for Read operations. db_for_write specifies the database to use for Write operations. allow_relation returns a boolean value that determines if a relation should be allowed between two objects. allow_migrate returns True if migration should be allowed to a specific database.

However, not all these four methods need to be specified in our router class.

For more detailed information about these four methods, you can check the official Django documentation on managing multiple databases

To setup this router:

Create a python file In your project configuration directory:

I will name my file dbrouter.py

Add the router class in the dbrouter.py file:

In the simple ReadWriteRouter class we created above:

In the db_for_read method, we randomly return the replica or the default database. This will allow us to balance the read query between the two databases (A better algorithm could be used to select the database to read, but this will suffice for this tutorial).

However, we must put a check in place to know if the database chosen randomly is available to accept connections before returning it. I added the print functions to log the status of the database and to have an idea about which database was returned.

The db_for_write returns the default database as it’s the only database that allows write operations.

Now that we have our router class, we need to tell Django to use this router class by installing it in the DATABASE_ROUTERS in the settings.py file.

The DATABASE_ROUTERS configuration specifies a list path to router class names that tells Django how to route database queries.

Open the setting.py and add the following:

You can now create migrations for the model class we created earlier and migrate.

Open up a terminal and run the following commands:

You should have the output below:

You can check if the tables are created for the primary_db and the secondary_db in the Postgresql terminal as shown below:

Open the postgresql terminal for the secondary_db running on port 5433 as a postgres user:

Open the postgresql terminal for the primary_db running on port 5432 as a postgres user:

You should get an output as shown above also.

This shows the data has been replicated to the secondary database from the primary database.

Open up the Django shell so that we can run queries:

Import the model and run a write database query:

Perform a READ operation like retrieving all the model instances:

Either of the two databases should be returned. You can try this multiple times until both databases have been returned at least once as shown in the image below:

If you try a WRITE operation by explicitly specifying the replica, you should get an error as shown below: 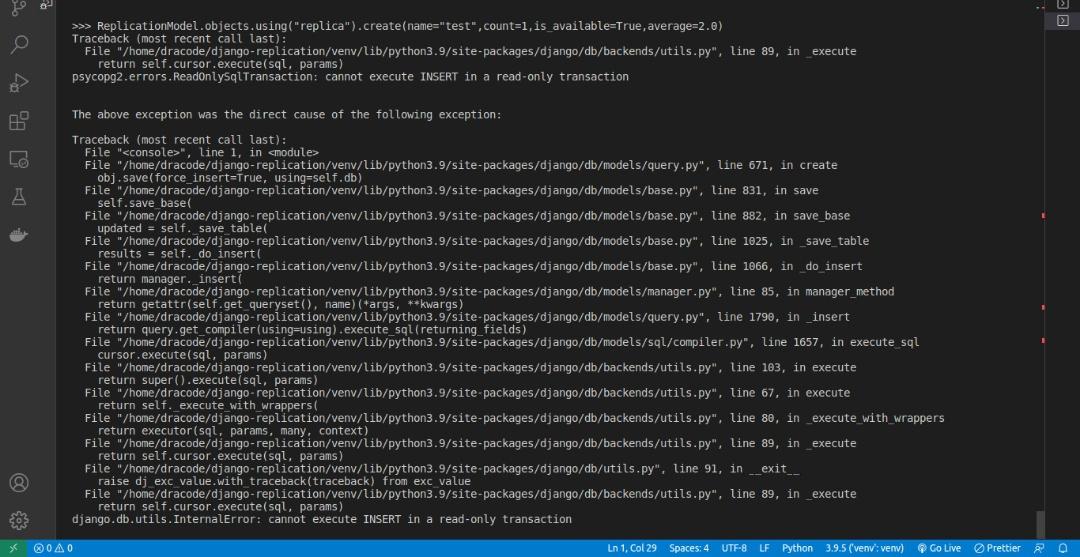 Stop the primary database container and run a Read query on the database:

In the terminal console:

In the Shell console:

You should get the output below anytime the router returns thedefault database:

In this tutorial, we were able to configure two Postgresql databases for data replication and connect the two databases to a Django application that routes the queries to the appropriate database.

Ahmad is a Software developer and a Technical writer with so much interest for Django related frameworks.

You may also enjoy
Linting Markdown And Documentation
8 minute read

You need the ability to search and manipulate text on the command line, especially when performing repetitive tasks. This is what makes sed, or stream edito...