How Much Can You Get For Free?

Here at Earthly, we care about your CI/CD dollar. That’s why we decided to pit the free tiers of four of the top CI/CD platforms against each other to find out which one provides the most bang for no bucks. In this post we’ll compare Github Actions vs GitLab CI vs Circle CI vs Travis CI using the following criteria: 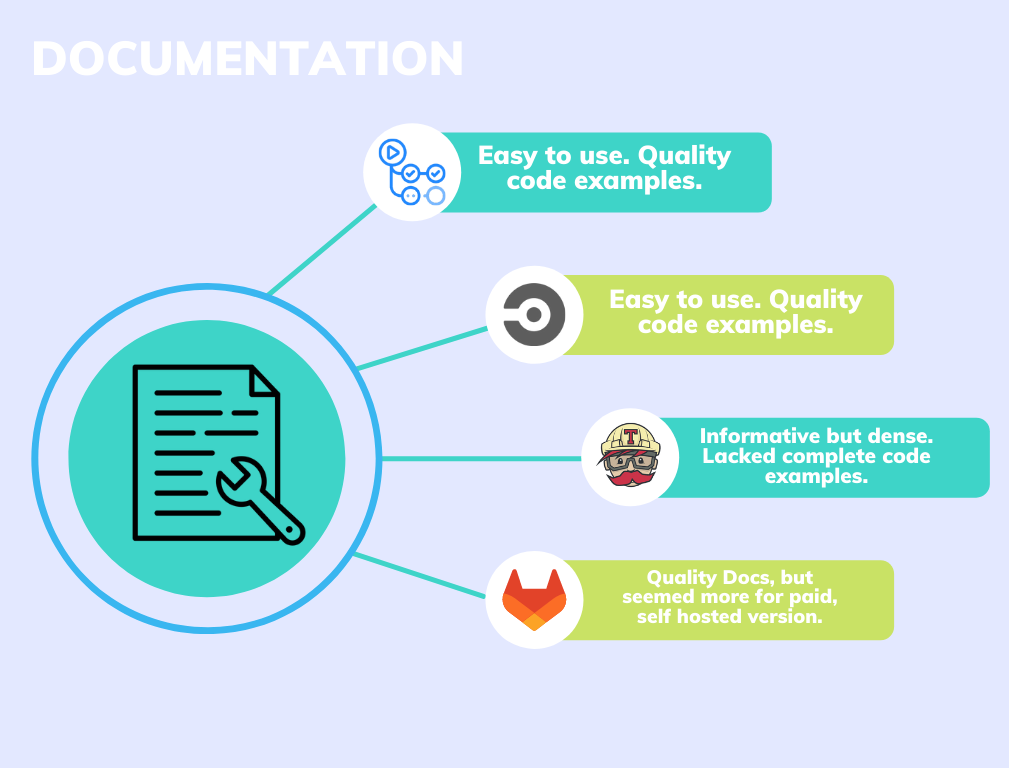 Github Actions is the newcomer among the group, but it’s grown quickly since its launch in 2018. Unlike Travis CI or Circle CI, which both allow you to connect projects from GitLab and Bitbucket, Github Actions requires that your code be hosted on Github. Once your code is on Github, though, there’s no additional sign-in or service you need to include. Having our pull requests and CI in one place was convenient when debugging and removed some of the frustration that can come with jumping back and forth from the code to another service that holds the build logs.

Similar to Circle CI, the docs were extremely easy to use and offered in-depth code examples, screenshots, and charts that made learning to use the service quick and easy.

Getting set up and running with Circle Ci’s free tier was pretty straightforward. Create an account and link it to your Github, Bitbucket, or GitLab account. After that, all it took was adding a .circleci/config.yml file to our project repo and we were up and running.

The docs were among the best we looked at. Information was well organized and it was easy to find answers when we encountered issues. Best of all, nearly every page of the docs included code examples, usually entire example files.

Like Circle CI, Travis CI also supports Github, Bitbucket, and GitLab. Once signed in, we were able to connect a repo with a few button clicks, add a travis.yml to the root of the project, and we were good to go.

The documentation was informative and we could usually find what we were looking for, but sometimes not without a great deal of digging. Pages are dense with text, which can be helpful, but code examples were usually limited to a few lines, and it was sometimes unclear where the code fit into the larger config file.

GitLab, like Github, is an online git repository that offers CI/CD services. Also, like Github, you’ll need to have your code hosted on GitLab to create pipelines. Once you have a repo set up, getting started with GitLab CI was just as easy as the rest: add your config file and you’re ready to go.

We found the GitLab documentation challenging to use when our primary focus was their SaaS offering. GitLab seems to be putting most of its efforts toward being a self-hosted solution, either on-prem or in the cloud. As a result, a lot of the tutorials and documentation are written for users who are hosting their own GitLab runners. The first step in their getting started section tells you to install and register a runner before you can start building, but these steps are not necessary if you want to use runners hosted by GitLab, and there’s little information on the getting started page about this option. It took a little more digging and some outside sources to get started without having to host our own runner.

When it came down to available hardware Circle CI was way ahead of the others. It was also the only service that offered multiple resource sizes ranging from 1vCPU / 2GB of RAM to 4 vCPU / 8GB of RAM.

For this metric, we simply ran df -h as part of our builds and noted the available space. Here Circle CI won out again. Not only did it offer the most available space, but it also offered the highest percentage with 94% of the disk available for our job. Compare that to Github Actions which showed 32GB available of 84GB totally, or 38% of total disk space. Gitlab’s measly 15.6GB was not enough to accommodate our build or our benchmark run. More on that in below.

With one exception, all the services we looked at limited usage by allotting a certain amount of build minutes per month. Run out of build minutes and you’ll be forced to pay for more. Again Circle CI won out by offering three times the build minutes as Github Actions, which came in second.

Travis does not use the concept of build minutes. Instead, it offers build credits. The amount of credits you use for each build depends on several factors, but we saw about 10 credits deducted per run when conducting our benchmark tests. It’s hard to say just how exactly this compares to build minutes offered, but since you have to use your free 10,000 credits within the first month of signing up for Travis CI, we considered it to be last when it comes to value. Travis’s free tier was the only one that expired. One month after sign-up there is no way to use Travis for free.

To test the performance of each service, we needed something to build. We wanted something open source that also showcased a variety of programming languages. With those criteria in mind, we landed on this open-source benchmarks project. This repo contains a handful of different benchmark tests that run on over two dozen languages and frameworks. Some of the tests can take a long time to run, so in order to keep the test manageable, we decided to just use the Base64 encoding/decoding benchmark. You can check out our fork to see how we set up the config files for each pipeline.

This is how we ran the test on each platform.

We repeated this 5 times to get a sense of how much variation you might expect.

For each service, you’ll see three sets of data.

GitLab CI’s free tier was the weakest of the bunch across the board. As a result, we were unable to build the benchmarks nor run the Base64 test without encountering an out of disk space error.

If you’d like to get some idea of how GitLab performs, we were able to get it to run the Earthly examples in the next section.

At Earthly, our goal has always been to create better builds. We build Earthly so it can run anywhere, so naturally, we were curious to see how it would perform on each service’s free tier. The Earthly repo contains dozens of examples in Python, Go, Ruby, react, C, and many more. You can checkout this fork if you want to see how we set up our config files for each pipeline.

This is how we ran the test on each platform.

In this case, Github Actions had a slight advantage over Circle CI. GitLab CI was able to run the job to completion, but it came in dead last, nearly doubling the time of our second runner-up, Travis CI.

Overall, if speed is your primary concern and you’re on a budget, then Circle CI is the clear choice. If you’re not looking to run a ton of builds each month and your code is already in Github, then Github Actions can offer similar performance with the added convenience of having everything under one service. Even though we liked Travis better, our main criteria was value, and since you can’t use Travis for free after the first month, GitLab was able to grab the third slot, despite it being weaker in almost every other category. 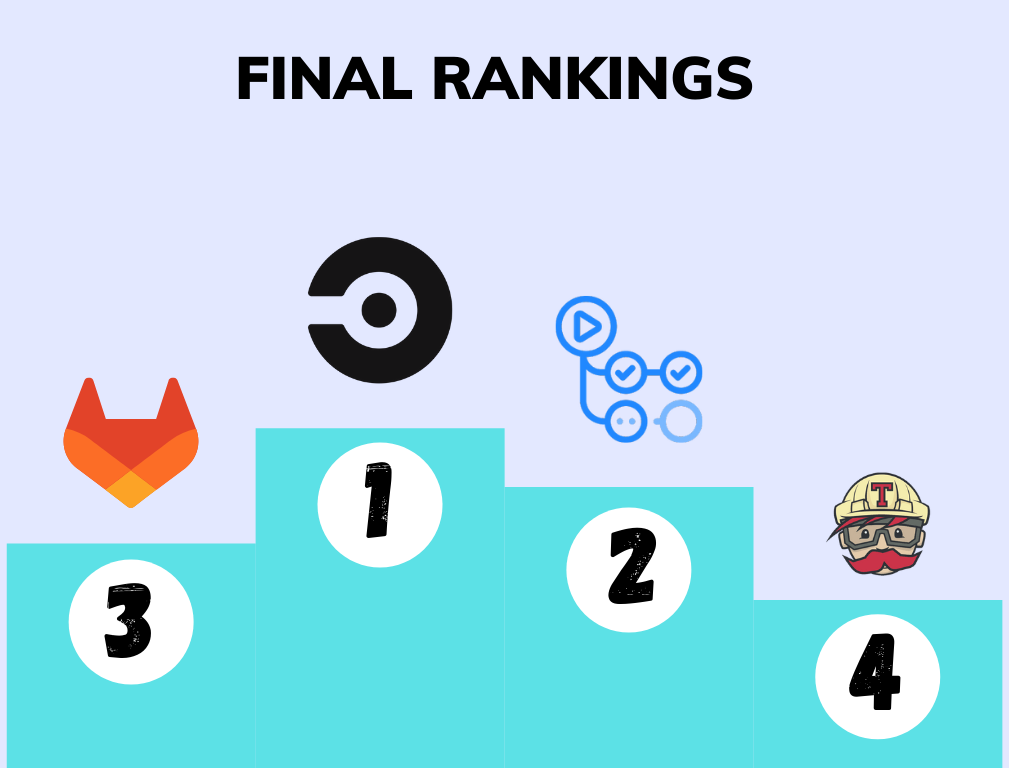 Remember, we only looked at the free tiers offered by these services. As your project grows, performance may vary. Also, each service scales differently so even though you may like the convenience of Github Actions, you may find that Travis CI becomes more cost-effective as you run larger and more complicated pipelines.

You may also enjoy
Docker and Rails: Running Ruby on Rails with Docker
8 minute read

Build Your Own Ngrok Clone With AWS
11 minute read

Ngrok is a tool that allows you to create secure, publically accessible URLs for your locally running code.