Here is a problem. You are tasked with improving the hot loop of a Python program: maybe it is an in-memory sequential index of some sort. The slow part is the updating, where you are adding a new sorted list of items to the already sorted index. You need to combine two sorted lists and keep the result sorted. How do you do that update?

Yes, this sounds like a LeetCode problem, and maybe in the real-world you would reach for some existing sorted set data structure, but if you were working with python lists, you might do something like this1:

Python has a built-in method in heapq.merge that does this. It takes advantage of the fact that our lists are already sorted, so we can get a new sorted list linear time rather than the n*log(n) time it would take for combining and sorting two unsorted lists.

Imagine my surprise then when I saw this performance graph from Stack Overflow:

Sorting the list is faster than just merging the list in almost all cases! That doesn’t sound right, but I checked it, and it’s true. As Stack Overflow user JFS puts it:

The reason sort beats merge in most cases is because of a man named Tim Peters.

Python’s list.sort is the original implementation of a hybrid sorting algorithm called TimSort, named after its author, Tim Peters.

Timsort is designed to find runs of sequential numbers and merge them together:

The main routine marches over the array once, left to right, alternately identifying the next run, then merging it into the previous runs “intelligently”. Everything else is complication for speed, and some hard-won measure of memory efficiency.

This is why (x + y).sort() can be surprisingly fast: once it finds the sequential runs of numbers, it functions like our merge algorithm: combining the two sorted lists in linear time.

Timsort does have to do extra work, though. It needs to do a pass over the data to find these sequential runs, and heapq.merge knows where the runs are ahead of time. Timsort overcomes this disadvantage by being written in C rather than Python. Or as ShawdowRanger on Stack Overflow explains it:

This means that if I drop down to C and write a C extension I should be able to beat Timsort. This turned out to be easier than I thought it would be2.

The bulk of the C Extension, whose performance I’m going to cover in a minute, is just the pop the stack algorithm discussed before, but using an index to point to the head of the stack:

The nice thing about C extensions in Python is that they are easy to use. Once compiled, I can just import merge and use my new merge method:

Testing my new merge with a list of integers and floats, we can see that we are beating Timsort, especially for long lists:

Graphing the performance we get this: 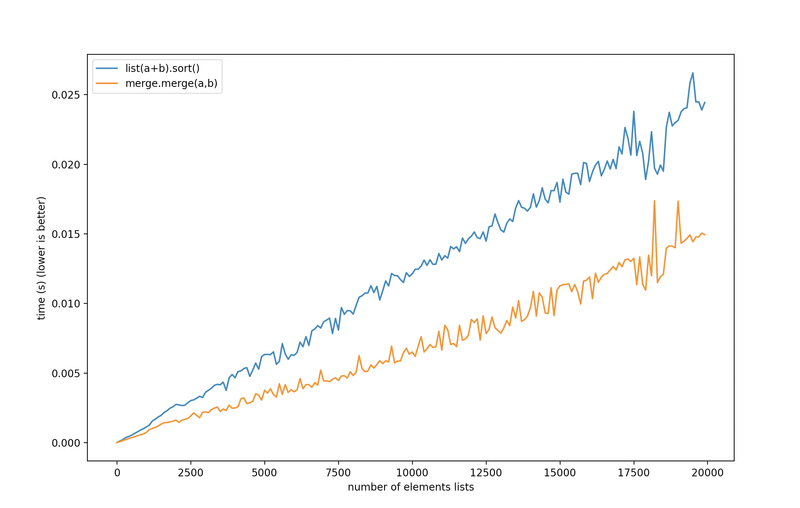 We are beating Timsort with our merge

But if we switch to a list of only integers sort is beating us for small lists and even on big lists our performance improvement is thin at best: 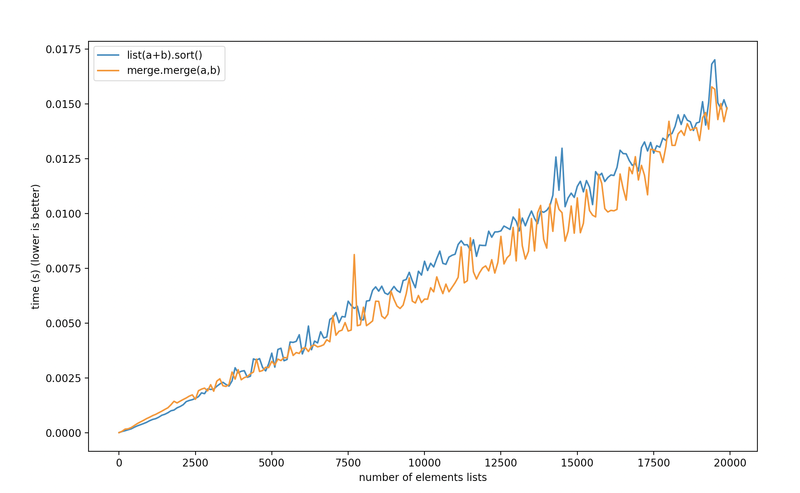 With lists of all int or all float we lose our advantage.

What is going on here?

It turns out that Timsort has some extra tricks up its sleeves in the case of a list of integers. In that initial pass over the list, it checks the types of the elements, and if they are all uniform it tries to use a cheaper comparison operation.

Specifically, if your list is all longs, floats, or Latin strings Timsort will save a lot of cycles on the comparison operations.

Learning from Timsort we can bring in these comparison operations ourselves. We don’t want to do a full pass over the list, or we will lose our advantage, so we can just specialize our merge by offering separate calls for longs, floats, and Latin alphabet strings like so:

Doing that, we now can finally beat Timsort at merging sorted lists, not just when the list is a heterogeneous mix of elements, but also when it’s all integers, or floating-point numbers, or one byte per char strings. 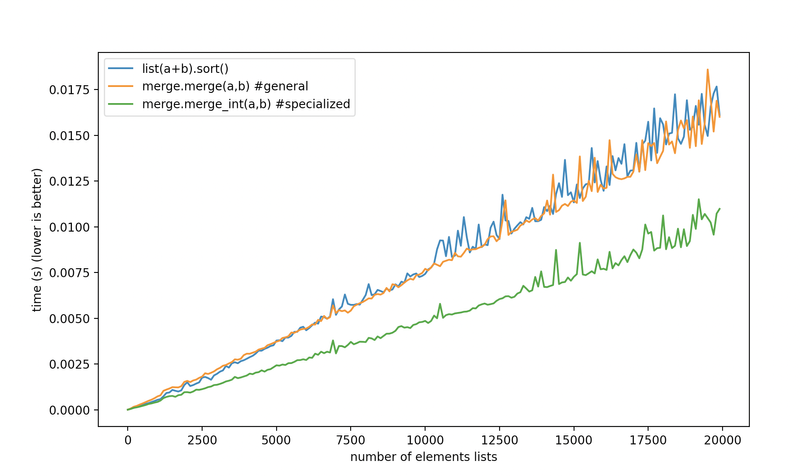 merge vs TimSort for int. 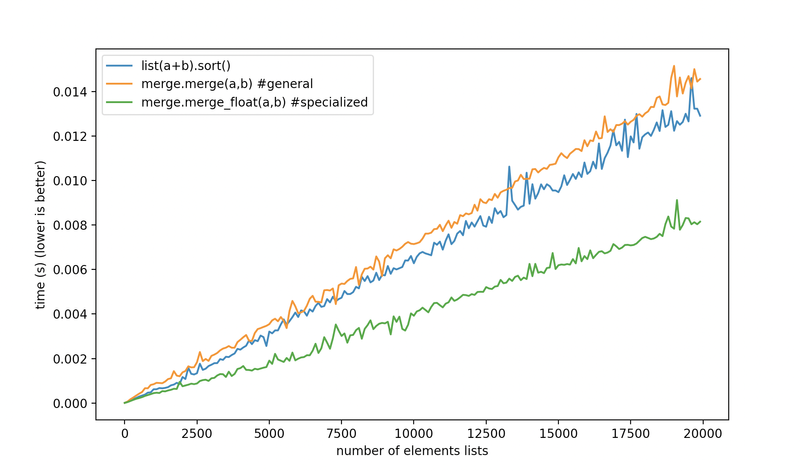 merge vs TimSort for float. 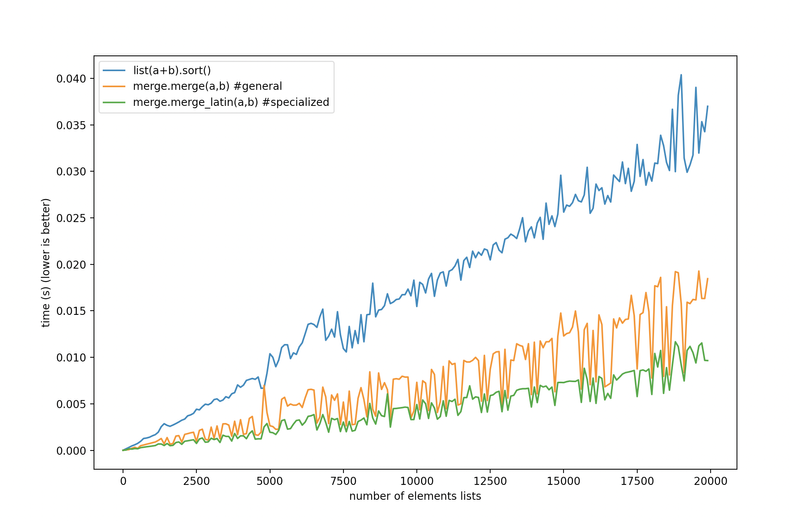 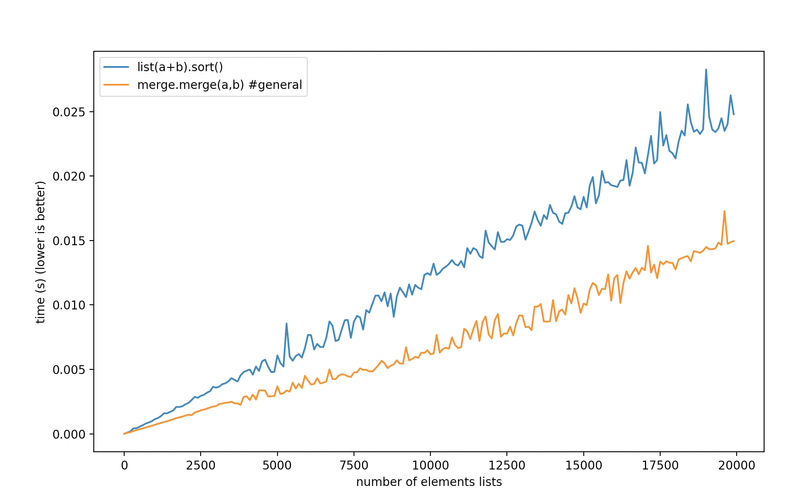 merge vs TimSort for everything without a specialized compare.

The default merge beats Timsort for heterogeneous lists, and the specialized versions are there for when you have uniform types in your list, and you need to go fast.

There, I have beat Timsort for merging sorting lists, although I had to pull in some code from TimSort itself to get here. I’m not sure how valuable this is: if you need to go fast, you might not choose Python, but it was a fun learning project.

Also, I learned that dropping down to C isn’t as scary as it sounds. The build steps are a bit more involved, but with the included Earthfile, the build is a one-liner and works cross-platform. You can find the code on GitHub and an intro to Earthly on this very site, and with that example, you can build your own C extension reasonably quickly.

The surprising thing, though, is how good Timsort still is. It wasn’t designed for merging sorted lists but for sorting real-world data. It turns out real-world data is often partially sorted, just like our use case.

Timsort on partially sorted data shows us where Big O notation can misinform us. If your input always keeps you near the median or best-case performance, then the worst-case performance doesn’t matter much. It’s no wonder then that since its first creation, Timsort has spread from Python to JavaScript, Swift, and Rust. Thank you, Tim Peters!

Kubescape is a free tool that improves Kubernetes security by scanning clusters and detecting YAML files that are not compliant with security standards such...