Creating software isn’t only about writing code; you need to build all the source code to get a usable software artifact. This build process can be done manually, but it can become difficult as you start working on larger projects. This is where tools like CMake and Make can help you automate the process. Both of these tools allow you to go from source code to executables.

A compiler is a program that translates source code into machine code. The compilation of code consists of a few steps, including preprocessing, compiling, and linking, to create either a library or an executable that can be directly run by the computer it was made for.

This compilation process is also known as the build process and is where CMake and Make enter the picture.

How CMake and Make Work

CMake and Make are especially helpful when it comes to automation and save you time by putting all the commands required to build the program in either a Makefile or CMakeLists.txt file without having to type them out every time.

On the other hand, CMake requires a CMakeLists.txt file and is a cross-platform Make. This means that it works on different operating systems. It allows compiler-independent builds, testing, packaging, and installation of software. It’s important to note that CMake produces build files for other systems; however, it’s not a build system itself. CMake can generate a Makefile, and then the generated Makefile can be used with Make in the platform being worked on: 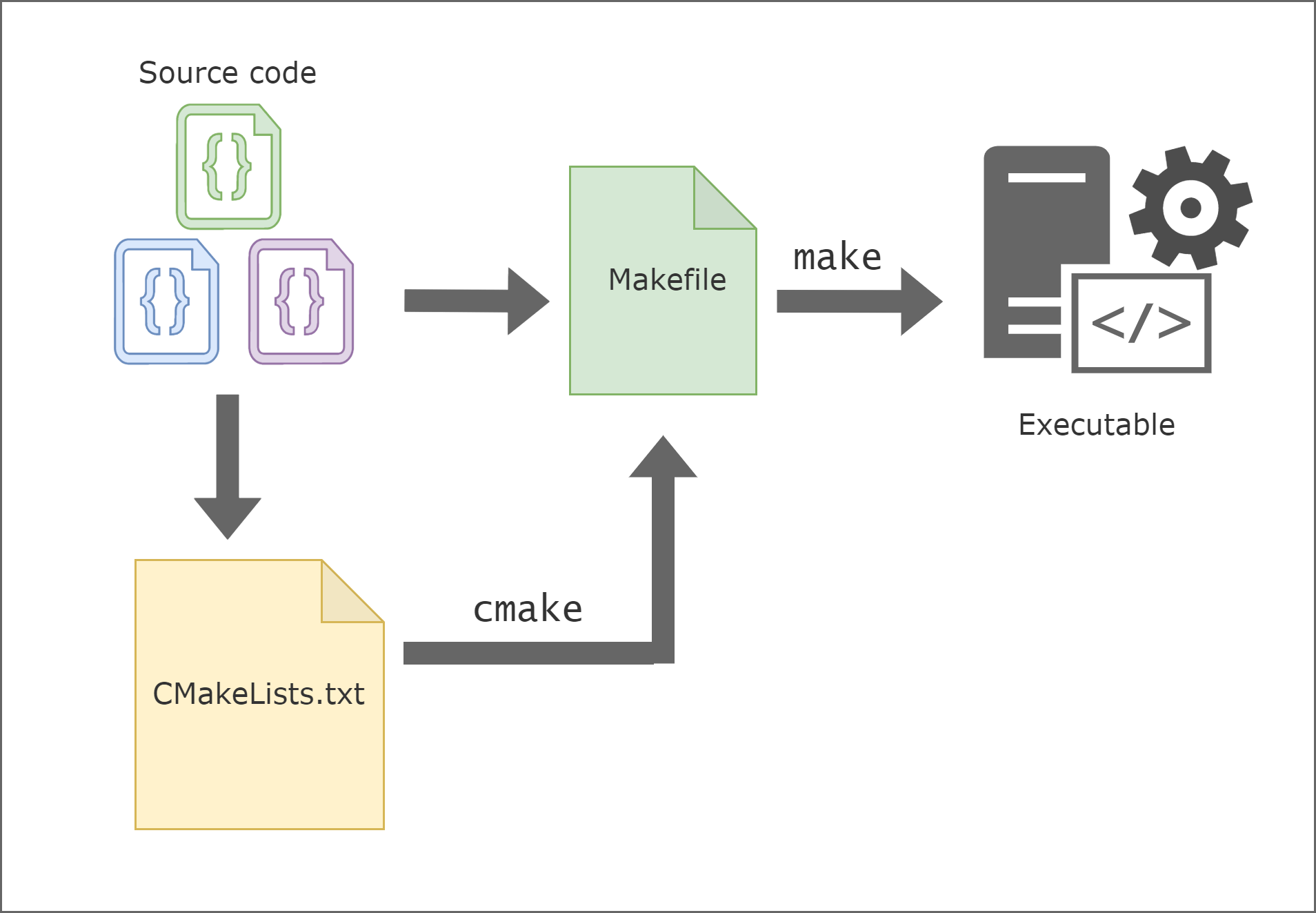 In the following sections, you’ll learn how to compile a simple program using both CMake and Make to better understand their differences.

To begin, you need to install Make and CMake on your operating system.

On both Windows and Linux, run the following command to check the CMake version number:

And the output on Linux will look like this:

Next, check the version of Make:

The output should look similar to the following:

If you’re on a Windows machine, check the MSBuild version:

Note: To build the CMake artifacts on Windows, you need to [install MSBuild]((https://learn.microsoft.com/en-us/visualstudio/msbuild/msbuild?view=vs-2022), a build engine.

Because Make comes bundled with the Unix operating system, there is no need to install it. However, there may be a need to upgrade to the latest version (which is version 4.3 at the time of writing) to improve functionality and prevent security vulnerabilities.

To install Make on a Windows machine, follow these instructions.

Cmake vs. Make Builds: Differences You Should Know

In this tutorial you’ll learn how to build an application with both CMake and Make. In doing so, you’ll learn the differences between the two, including graphical user interface (GUI) support, management of dependencies, and cross-platform capabilities.

One of the main differences between CMake and Make is that CMake creates output that can be used by build systems like Make. This means that CMake acts as a generator for other build systems and it’s not responsible for the actual compilation. In contrast, the output of Make is a compiled binary that can be executed on the target computer.

To demonstrate this, look at an example where the following C++ program is run, which gives a greeting, asks for an age, and then prints out that number. The program is composed of three files: main.cpp, age.cpp, and process_age.h:

To build your project with Make, you have to create a Makefile. Makefile entries generally have the following format:

For this example, the contents of the Makefile will look like this:

After creating the Makefile, the four files should now be in the directory:

To run this program using Make, run make in the terminal. This will compile the files using the g++ compiler, which should already be installed on the computer. The output of this command will be a hello_age executable:

Next, run the command ./hello_age, which will run the executable and print out “Hello, Earthly!”. Then it will give a prompt to enter the age. For a given age of “50”, it will print the following:

After running the application, it’s time to clean up the created files with the make command by running the command make clean, removing age.o, main.o, and hello_age from the directory:

Now that you’ve seen how Make builds a C++ program, let’s see how CMake does it.

Start by creating a directory named hello_cmake and put in three files: age.cpp, main.cpp, and process_age.h:

Next, create a file named CMakeLists.txt, which is the CMake configuration file. It contains the instructions that will be used to build the program:

The CMakeLists.txt file contains a set of directives and instructions describing the project’s source files and targets. The above CMakeLists.txt starts with cmake_minimun_required(VERSION 3.10.0), which specifies the minimum version of CMake that can be used to process the project. In this instance, you need version 3.10.0 or an error will be reported.

project(hello_cmake) specifies the name of the project that is given to the cmake command and add_executable(hello_age main.cpp age.cpp) adds an executable target named hello_age that is built from the specified source files (ie main.cpp and age.cpp).

Navigate into the build-unix folder and run the following command if using a Unix system:

This will build the project and create a Makefile in the build-unix folder:

The following are the contents of the directory build-unix after running the CMake command:

The Makefile has now been created. To compile the application, run the make command in order to put a hello-age executable inside the build-unix directory:

Then run the hello_age executable file, which was created by running the make command:

To ensure that this executable works similarly to the one created by the make command, run ./hello_age:

As you can see, the program works as before. The only difference is that this time, “51” was inputted as the age.

In summary: The difference between CMake and Make is that Make creates executables from the source files, which have to include a Makefile. In contrast, when using CMake, a CMakeLists.txt file is provided, which is used to create a Makefile. This Makefile is then used with Make to create the executable that can be run.

Another difference between CMake and Make is that CMake is cross-platform, while Make is single platform. This means that with CMake, you can build the same program—using the same command—on different platforms. To demonstrate this, build a hello_age program on a Windows platform.

On a Windows machine, copy the directory hello_cmake and then navigate into the build-windows directory using the command prompt:

Then run the following cmake command:

This will build the C++ code for Windows Visual Studio 15 2017 build system:

If you navigate to the build-windows directory, you should be able to see the following files:

Next, open the hello_cmake.sln file with Visual Studio Code or compile it in the command prompt. To compile it, just make sure MSBuild.exe is in the path. Then run the following command from within the build-windows folder:

The previous code will build the project, and the following will be the output:

This build process will create three directories: Debug, hello_age.dir, and Win32. Find the executable file in the Debug directory and run it using the following command:

As shown, the same commands can be run on both Unix-based systems and Windows-based systems to create a build system with CMake, which makes CMake platform-agnostic. After the output is generated, any build system of choice can then be used to build the application. In this case, Make is used for the Unix-based platform and MSBuild for Windows.

CMake Has a GUI

CMake comes with a GUI that can be used to configure projects. The GUI is an alternative to the command line, especially if the preference is to perform commands visually. In contrast, Make is purely a command-line tool that does not provide any sort of GUI:

For beginners, the CMake GUI makes for an easier learning curve and guides in getting a build. It does this by being intuitive, providing suggestions, and giving instant feedback by highlighting problematic commands.

To use the GUI, you need to specify the paths to the source code files as well as the output of the build process.

Create a directory and copy over the main.cpp and age.cpp files. Also create a new directory called gui_build which is where the build files will be created.

The directory should look as follows:

After specifying the source and output directories, the CMake GUI should look as follows: 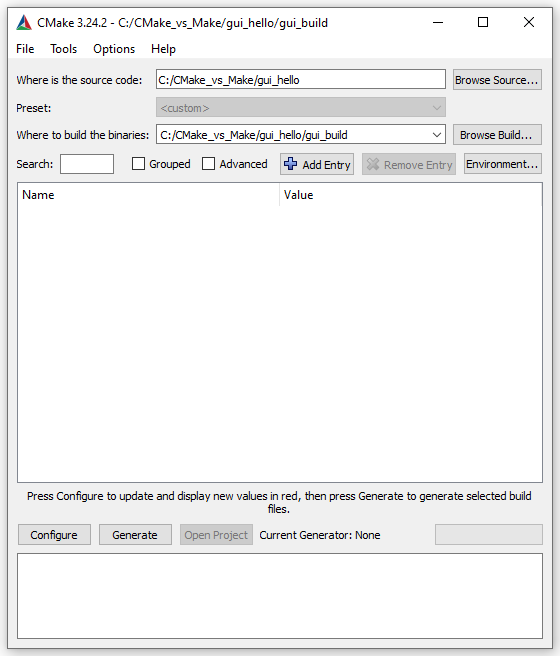 Then click on Configure which will open a dialog box for you to choose which build system you want to generate for.

In this case, choose MinGW Makefiles and then click on Finish.

This will give instant feedback that there is no CMakeLists.txt file which demonstrates how the CMake GUI highlights problems.

Now add the CMakeList.txt file and run Configure again. This time there will be no error.

Then click on Generate to generate the Makefile. If you go into the directory you specified to have the binaries, you will see the files generated.

CMake was released in 2000 and is still maintained and supported by an open-source community alongside Kitware under a very permissive Berkeley Source Distribution (BSD) license:

The latest release of Make is version 4.3, released at the beginning of 2020:

Active development is important as it shows that new features are being added and security vulnerabilities are being fixed regularly. For this reason, if you’re starting a new project, CMake is the better choice.

More recently, CMake added the FetchContent module, which is a better way to fetch dependencies that have submodules. FetchContent allows getting the source code of the dependency, including it in the CMake project, and then having it compiled from the source with the rest of the project. In contrast, Make doesn’t have this module, and the path to the dependency has to be explicitly set.

In this article, you’ve learned the differences between CMake and Make, as well as the advantages of using CMake including its active development, dependency management, and cross-platform capabilities. If you’re looking to explore other build tools, check out Apache Buildr, Apache Maven, and Gradle.

Ndafara Tsamba is a software engineer turned self-taught data engineer and technical content creator. When he is not working or creating technical tutorials, Ndafara plays chess and Call of Duty mobile.

make is a commonplace utility in the development world. It automates the process of generating executables, documentations, and other non-source files from ...